When the Mastercard ad on TV proclaims philosophically that there are some things moolah just can’t buy, it isn’t joking. Sages have always known that the lure of the lucre comes with its limits, reminding us across epochs and civilizations that we can’t exchange money for what matters: happiness. So, indeed, have wise people-leaders, stressing the warmth of non-monetary rewards over the impersonal currency, the more overt and obvious counterpart. So where, and why, does the purchasing power of money, so to speak, end? And what mysterious, magical laws rule the vast stretches of subconscious wilderness that lies beyond that rim?

The question needs answering, since modern-day managers - no matter what the function or industry - are expected to have ‘human skills’ on their resume. What the term means is the ability to truly engage the mind - the holy grail of talent evangelists and miners. A Gallup poll showed that organizations benefit from 21% higher productivity - and, to boot, a ‘stickier staff’ that’s more likely to stay on in the company - when it engages its staff, employees and workers compellingly. There’s no better way to engage humankind than by motivating and incentivizing it. A bear hug that has “What would we have done without you” written all over it is sublime. But you often have to take another step and seal it with a more tangible ‘reward’.

An empirical investigation into the effects of monetary and non-monetary rewards and recognition on motivation concerning lower-level employees in the retail industry suggested that a well designed motivational reward structure is the leadership and management‘s most potent device for building organizational commitment and loyalty. Once you have successfully done that, you have immortalized the moment forever - a bit like what memes do in the marketing space. Question is, should that reward be in cash, or in-kind?

Sure, You can lead a Horse to the Water, BUT…

In their research, Arnolds and Venter (2007) stated that - despite firms spending billions every year on incentives - there is a huge crisis of motivation in most large corporations. In their survey, Ellis and Pennington, while admitting that direct financial rewards could attract talent, their deeper impact on motivation was usually short-lived. Scrutinies by Locke on the four methods of motivating lower-level employees ranked money only at number two, not on top as many would have expected. There are empirical results to confirm that non-monetary rewards and recognition feature right on top of the list when it comes to lower-level employees. Slater, of course, altogether dismisses the assumption - that everybody wants money –as propaganda merely reflecting the mindset and conditioning of the privileged and the wealthy.

And Armstrong has gone even further with the interesting observation that the more we use rewards, the fewer employees tend to value the actual work that fetches those rewards: The focus, it seemed, shifts from the ‘result of the work’ to the ‘result of the result’, diminishing outcome quality and eroding even genuine levels of passion (intrinsic motivation) which the individual might have started with.

What most of these academicians seem to be saying, is this: If you have enough dough, you can lure a horse to come to the water. Why you may even be able to make it drink. But you won’t be able to make it enjoy the experience. Or come back for a second sip. Instead, theorists like to point out the pull-factor of less tangible incentives such as a job that challenges the intellect, constructive feedback that lets one get better at work and opportunities to pursue one’s interests - as powerful motivational triggers to engage workers.

What are the Disadvantages of Monetary Rewards?

1. Let's Address the Mammoth in the Room: What's Wrong with the Money?

While they say you can never have enough money, this stuff can give you plenty of grief too, especially if you are a leader, supervisor or manager trying to design ‘the perfect carrot’ for your teams. Let’s check out the problem with money.

Without getting too philosophical about it, a case may be made that money isn’t the best judge of competency, commitment and ‘heroism’ - all essential to the success of a task. It can, some would say, level-down and simplify all contributions on a common scale, diluting the contribution of some while ending up over-rating others’ – and creating the kind of indignation that comes with a feeling of injustice.

While many would furiously contest that statement, there is an entire school of thought that believes that money just doesn’t carry enough magic, if you know what we mean. A monetary reward is cold, transactional, and when it isn’t sending out strong vibes of an outright bribe, can feel like a perfunctory tick on the supervisor’s or HR’s checklist. When cash is added to a paycheque, it doesn’t feel like icing on a cake it is intended to be. When the incentive loop is designed on auto-pilot to credit the beneficiary’s bank account every time a target is met (much like a monthly EMI debit we barely notice), it sails past like a ship in the night, failing to register in the consciousness, and a perfectly good opportunity to make an ‘emotional ding’ is lost.

Compare that with a non-monetary reward - such as a trophy and an all-expenses-paid weekend getaway, for example - handed over to a winner who is beaming under the spotlights on a glittering stage during a gala R&R evening jamboree, and you instantly spot the difference between the two settings: The latter carries a Cinderella-type magnetism (the allusion works across genders, of course) that’s hard to emulate.

Never mind what they say about money talking. The strongest message you will ever convey to deserving rockstars on your team when you reward them with cash is that you have an efficient accounting department on your rolls. That’s about it. A non-monetary reward, on the other hand, can make a warm and personal statement,  and articulate a million things about you cash cannot. Like you consider the recipient ‘valuable’ enough to have taken up the laborious research of finding out what’s on his or her Wish List. Or that you have followed it up by taking time off your busy schedule and going out of your way to trawl the supermarket trenches and land ‘the perfect gift’. The flush of feelings this inevitably brings on, usually turns into a fondness and attachment with the organization – a big win for your culture strategy.

5. Money's No Good at Engaging.

Making room for non-monetary incentives presents an awesome opportunity to involve your teams  (including the likely winners) to co-create the rewards strategy. It’s a fun welcome break where everyone can put on their creative hats and let their imagination rip. Not only will you come up with awesome rewards ideas, but they will also come pre-filtered by the recipients themselves, making them a perfect fit and eliminating the wild goose chase for the ‘perfect prize’.

The best part? By grabbing this opportunity to engage your teams, you have just added precious dollops of bonhomie and ‘brotherhood’ amongst members, the morale-boosting effect of which will last for months.

What's Right with What's Not Money? The Benefits of Non-Monetary Incentives

1. It's Valued More Than it Costs.

Sounds intriguing? You see, when you take cash out of the equation, you put the achievement itself the hero, turning the reward into an exercise of adulation and recognition, which makes an immediate impression on the heart. For some of the reasons discussed earlier, non-monetary rewards are interpreted as ‘deeply personal messages’, and can double up as ice-breakers, ego-massagers, make-nice, gratitude-givers and appreciation-sharers. What’s more, they act as a powerful reminder of the accomplishment and make for excellent additions to the mantelpiece. Often, in terms of sheer utility value and durability, they can turn out to be extremely value-for-money possessions, too.

2. It's Easier to Separate From Pay.

When you offer a dinner invite to the launch of a new Philipino restaurant as a reward, you make an overt - and memorable - distinction between salary and incentive. This not only makes the gesture stand out but also takes care of the ‘unfairness’ factor discussed earlier.

Let’s face it - it’s not always comfortable to talk about cash, and even harder to start a ‘sparkling conversation’ around it, which is why you won’t see too many people discussing it around the water cooler. Non-monetary experiences, on the other hand, make for awesome talking points, giving the recipient a great way to break the ice, make an impression or just casually engage the listener during in-between-work breather sessions.

Finally, trends show that non-cash ‘benefits’ - be it ‘personal time’ to explore side passions, wellness programs or office perks – are particularly cherished by Millennials and Gen-Z workers, which is important information for those building human frameworks that will define the ‘future of work’.

3. It Touches us at a Deeper (Intrinsic) Level.

People are driven by two kinds of forces. The external one - Extrinsic Motivation - makes us chase materialistic possessions, indulgences and self-gratification, such as money, fame and earthly pleasures. On the other hand, the internal one - Intrinsic Motivation - makes us follow native passions and impulses that we pursue their own sake, and because they bring us happiness and fulfilment.

While both are important for success, intrinsic motivation occupies a special place in the workplace because as a self-driven, proactive force that doesn’t care too much about precedence, opinions or applause, it can take businesses from ZERO TO ONE on the sheer force of will, as no strategy or technology can.

Non-monetary rewards have long been a favourite of mentors who have leveraged the tool as a subtle way to tickle the inner fire of their people, without being too obtrusive. Roughly, that means designing an ‘enabling’ workplace that nudges, inspires and empowers employees to pursue their ambitions while staying aligned to business goals - and then gently stepping back to allow the magic to unfurl on its own.

Gallup Data suggests that 75% of the reasons why people leave an organization is within the control of its leaders. According to Linkedin TOP VOICE Amy Volas, 4 things we can do to stop this bleeding are :

Amy also listed ‘hiring better’ as an important tactic, but that’s a story for another topic and day.

Yes, It's Time to Put our Mouth Where our Money is.

And express our feelings with more than just cash. Be it lunch with the CEO, Google-type ‘ time’ to pursue alternative passions, flexible work formats, learning and coaching opportunities, acknowledging contribution  - even presence - now and then, opportunities to volunteer for exciting community projects, rewarding in public… you get the drift. Get creative with your rewards and you will have unboxed something precious: Employees, channels and networks who put the organization’s interests first, simply because the organization reciprocates in kind.

Cash is Boring. Discover the Exciting Universe of Non-monetary Rewards for Employees... With PLUM.

PLUM is easy to implement, integrating effortlessly with your current technologies and systems like CRM, HRMS, PRM, Surveys and more. And apart from breezy customizability and deep personalizability, PLUM’s omnichannel nature makes it compatible with any delivery medium your systems are comfortable with, such as On-Screen, SMS, Email, Whatsapp, QR Codes, Notifications and several others. Finally, PLUM’s data-rich reports and analytics bring you never-before visibility and insights into every aspect of your incentive eco-system (usage patterns, spending patterns, ROI) so that you can keep optimizing and improving it.

Manoj Agarwal is the Co-Founder and CPO at Xoxoday. He is an MBA from IIM Kozhikode comes with 14 years of experience in building companies, technology, product, marketing, & business excellence.

Deliver amazing recipient memories with custom gifts. We aim to make your search for the perfect gift just that bit easier.

Repeated customers are the lifelines of brands and retailers.

Entertain and retain your loyal customers with exclusive reward points. Use Xoxoday to create better relationships with your customers. 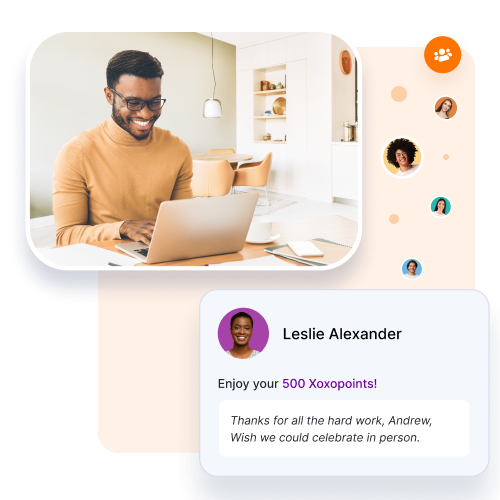